An unfortunate accident caused by students leads to a Wilson ban. 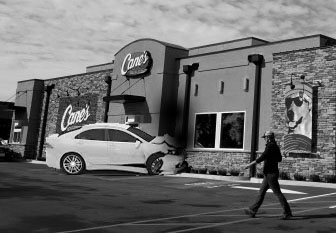 On November 5, the Long Beach traffic circle added a new restaurant that many Wilson students anticipated, the Louisiana native, Raising Cane’s Chicken Fingers. Unfortunately, as of this week, Wilson students will no longer be able to enjoy meals from this iconic, fried chicken-supplying restaurant. During lunch on March 10, a group of Wilson freshmen crashed their car into the side of the Cane’s building while expressing that “Chick-fil-A has better chicken and lemonade.” No injuries were caused at the scene but Wilson was quickly stripped away from its chicken finger privileges because of the incident.

The Wilson jersey that hangs on one of the building’s walls will be taken down promptly due to the incident. The restaurant will refuse service to any Wilson student during lunch and after school hours on weekdays. Wilson junior inside of the restaurant, Claud Gravy said, “I’m just grateful I had the chance to enjoy my last lunch at Cane’s in four years!” To end on good terms, the establishment decided to hold back on charges against the Chick-fil-A-loving Wilson students.

The ninth grader driving the vehicle claims that crashing into Cane’s was never his intention. Chick-fil-A, as it is located across the street from the rival chicken establishment, was the original destination for the group of boys. The driver just happened to get a cramp on his left pinky and swerved the car right into the newly-constructed building. The freshman group are still yet to be identified, they have chosen to keep their identities hidden for safety reasons– chicken lovers are mad as a wet hen.  Raising Cane’s is yet to release a statement about the crash, but one thing is for sure, it will be Chick-fil-A’s pleasure to serve the many chicken craving high school students from now on.