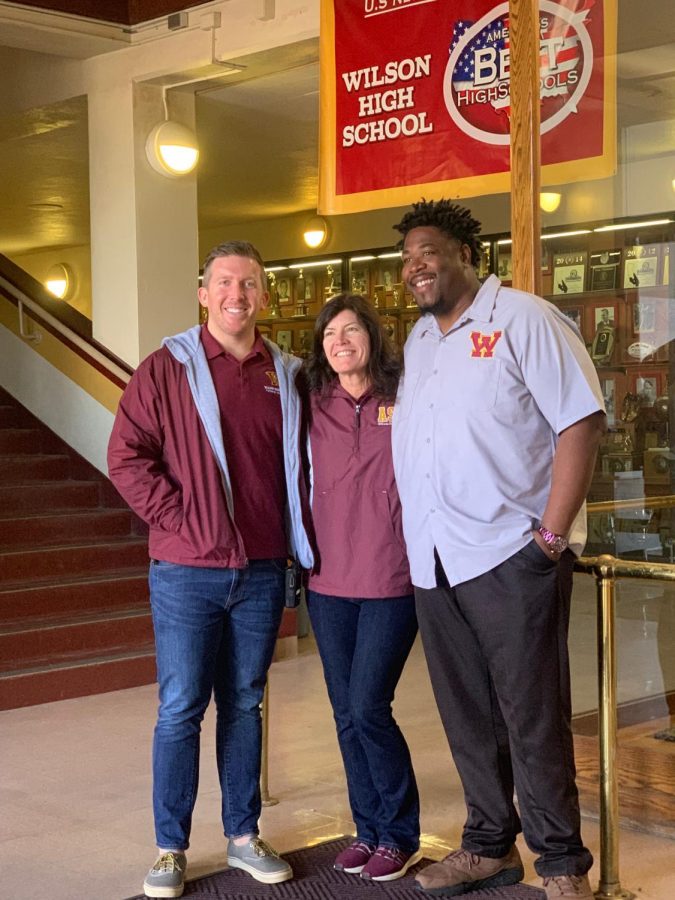 Wilson has been faced with many changes  throughout this past year. It all started after Dr. Blazer announced her retirement as Wilson’s principal. This left an empty spot in administration– but soon enough it was announced Mrs. Holland would be the new principal for the upcoming school year. Though that wasn’t the only change in administration. The 2019-2020 school year brought many new faces to Wilson, as Wilson has welcomed three new pathway administrators, Mrs. Holland, Mr. Wilson, and Mr. Steinhauser.

A big part of what makes Wilson special is our different pathways. Each pathway has a trio which consists of a head administrator, head counselor, and head teacher that help the pathway run smoothly. Unfortunately, most students don’t have a clue who any of their pathway administrators are. Luckily, our new administrators want to create a relationship with their students in their respective pathway. Their goal is to build their pathways so that students can be successful in highschool which in turn, will guide and help them discover a desired career.

This year Mr. Steinhauser was promoted to assistant Principal. Before college he had an interest in Pre-med but his love for teaching took over which inspired him to pursue a career in education. When he joined the Wilson staff, he was a Teacher on Special Assignment and he eventually became BioMed’s head administrator. He states that BioMed is a unique pathway compared to other schools.

“Wilson’s program is research based… and we give students the option to do dual enrollment to focus on specific interests such as patient care and forensics.”

He also stated that he wants to help students find their desired career interests by continuing to have a career night every year, develop a college and career plan, and bring in guest speakers to deal with any concerns. Having Mr. Steinhauser as a head administrator will hopefully bring prosperity to the BioMed pathway.

Another new administrator is Mrs. Holland. Although she is Wilson’s new principal she also juggles the job of being the Head of SOTA. Mrs. Holland has a lot of experience in the Arts, especially since she was part of UCLA’s marching band and once she graduated she became a music teacher for 15+ years. This gave her a lot of insight into SOTA and the program’s focus in the arts. Her experience allows her to connect with the students in the pathway who also share a love for the arts. It’s imperative that each of the administrators can relate to their pathway and it’s students. For SOTA, Wilson is lucky to have Ms. Holland and her vision of a successful pathway, she wants to motivate SOTA students.

Furthermore, Mr. Wilson is also a new face in the crowd at Wilson. He has a great attitude and is passionate about making WAVE students feel more inclusive and less stressed. His main goal is not only to have his pathway students be successful but also have them understand how to balance school and their personal time. He stresses a lot on the end game,

“The big thing was how to create balance.”

Also for WAVE students, their families are often extremely involved in their academia track, to which Mr. Wilson adds,

“We are not only talking to students but we are folding in families too.”

Our new pathway administrators have been a great addition to the Wilson Staff, as they have made goals for their pathway and students to be successful. Continuing on, their future plans are to create a fun and engaging environment for the Wilson bruins. So if you see the staff around make sure to wave hello!