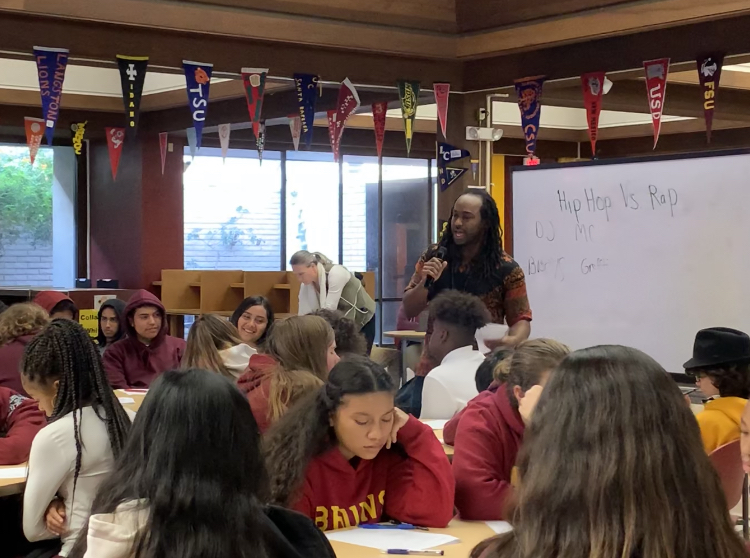 More than 600 Arts Pathway students analyzed, wrote, and performed poetry during a two day spoken word workshop during the first week of the new semester. Long Beach poets Micah Bournes and Aman K. Batra, lead the students in analysis of Hip Hop as a culture and the dissection selected rap songs, catching students’ attention with discussion on artists like Chance the Rapper, Wiz Khalifa and Will Smith.

Bournes started his presentation by playing a video for the classes which identified the similarities between renowned musicians and intellects, Gilbert and Sullivan and Tolkien, with the song of Chance the Rapper and Childish Gambino, Favorite Song, to show how they are musically and intellectually similar. Bournes showed how the song included complex rhyme scheme reminiscent of traditionally prestigious figures.

Bournes facilitated a discussion of negative perceptions toward rappers. He explained that many people believe that rappers lack creative complexity, but he tells the audience,” they think [rappers] lack intelligence.. Rappers are poets, rappers are highly intelligent.”  He also emphasized that he wanted to dismantle the stereotypes concerning hip hop and rap. “Hiphop is a culture and it’s more than just making music,” said Bournes.

Bournes also introduced the three types of rap that go against the perceived idea that rap lacks intelligence. There are three types of rap: Narrative rap that tells a story, lyrical rap that enhances one’s ability as an MC, and conscious rap that often incorporates themes like politics and oppression.

The second half of the seminar was led by Batra who dissected, “Tell Them,” by Carvens Lissaint, which she hopes will connect with students and their own personal experiences. After she helped students analyze the poem, students were given the task to write their own “Tell Them,” poem. The following day students, teachers and presenters read their poems to the group.

Batra explained, “If students leave here feeling like they were honest with their stories and then were able to connect with other people in the room through being that honest, I feel like I’ve done my job well, I want people to go home and feel like [their not alone in what they go through].”

Many students had visceral reactions as they read their poems or heard the poems that their classmates read. Junior, Dominick Pierce recalls, “It was really moving, a lot of people cried.”

Eleventh grade English teacher Mrs. Smeltzer said, “It was amazing to see the connections students were able to make to each other. I saw students who would never interact with each other make and find similarities, and even tell each other that they are not alone. It was incredible.”

Although the seminar was very educational and filled minds with important, traditionally untaught lessons, Bournes and Batra’s main aim is to spark creativity in high school students.

“I encourage everyone to experiment with your creativity because there’s things that you might not have even tried at all yet that you might be really good at, or even if you’re not good at it, you might enjoy it and it might be a healthy outlet,” said Bournes. “You never know what you might discover.”