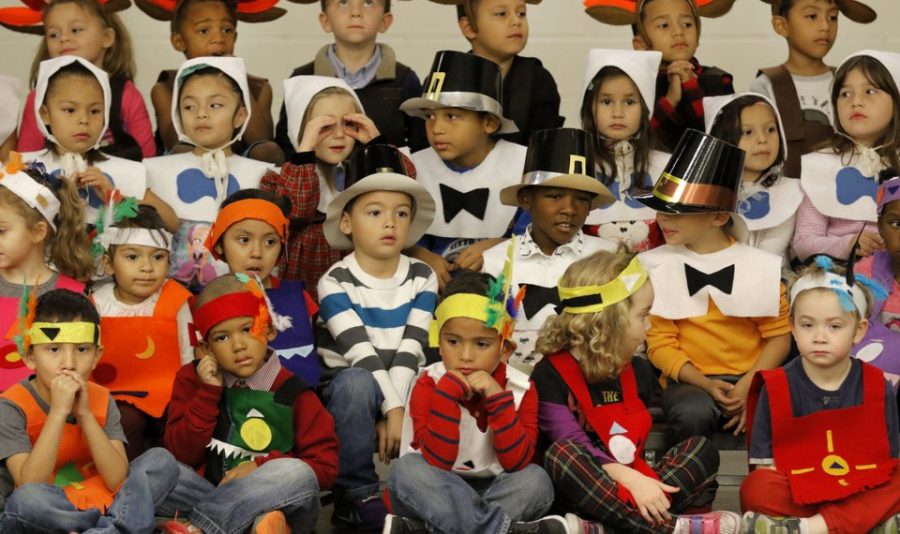 When told that it is Native American History month, many question the authenticity of the event– viewing it a fake holiday that parallels “National Donut Day.” Further, when told that it takes place in November, others call it “The War on Thanksgiving.” In fact, the whole of responses to the precedent of giving Natives their own heritage month is apathy, dismissal or rage. The original settlers on this continent, who practice their cultures in triumph and strife year round, are told one whole month of recognition is a tasking endeavor.

The decision to have the month of remembrance in November seems deliberate– and in fact it is. No other month better encapsulates horrific Native history in tandem with the group’s triumphs. The title challenges historical fallacies of what the original Thanksgiving was– counters the depiction of colonizers and Amerindians sharing cranberry sauce in ceasefire.

Around 1763, the prolific “blankets laced with smallpox” incident signaled European hostility toward Natives. In 1831, the Trail of Tears displayed the U.S.’s indifference to Native suffering. In 1887, the Dawes Act further lamented an American desire to erase Indigenous people and their history. And yet today the descendants of those American Indians, Alaska Natives and Native Hawaiians stand in impressive unity.

Still, Natives, in the wake of modernity, face problems that stem from historical violence, genocide and disenfranchisement. Encapsulating this is the statistic that one in three Native women will be sexually assaulted within their lifetime– stretching far above the “one in five” white women statistic and deriving from countless government reports. Colonizers created a culture which not only suppressed Native wellbeing but revoked Native women’s rights to bodily autonomy. Today they fight back against the militia of annexation and appropriation– equipped with Coalitions, Native-owned brands, Native-produced films and narratives, and events. The Occupation of Alcatraz scented the San Francisco air with Indigenous pride and reclaimed land– if only for nineteen months. From the 14th to the 20th of this year’s October, Native festivities combated the still well-established “Columbus Day.” Now, Columbus Day and Indigenous People’s Day occupy the same spot on most calendars– a semblance of change.

As recently as last Thanksgiving, kindergarten classrooms have been divided into “pilgrims and Indians” to celebrate the holiday. The “Indian” students wear paper-crafted headdresses and beaded shirts, epitomizing the Amerindian caricature. University students, in contrast, have championed for recognition of Native American Heritage Month– and received it from various campuses. At this juncture, Indigenous people see the start and stop of change; they see the country opening up to the prospect of amends dualled by antagonism and malevolence. No example of this could be more plainly and precisely manifested than the celebration of Thanksgiving.

Americans still celebrate the holiday as the day where Native Americans and pilgrims sat around peacefully and gave thanks. They expunge the genuine record, in favor of “Native-themed” Thanksgiving decor. The Mashpee-Wampanoag tribe may have been present at the first Thanksgiving, but the government continues to take acres and acres of their land. U.S. liberal-leaning establishments from schools to businesses claim to support Indigenous people, but give students a “Thanksgiving” break or create special sales on the 28th. This duality incites the question, can Americans ethically celebrate the holiday?