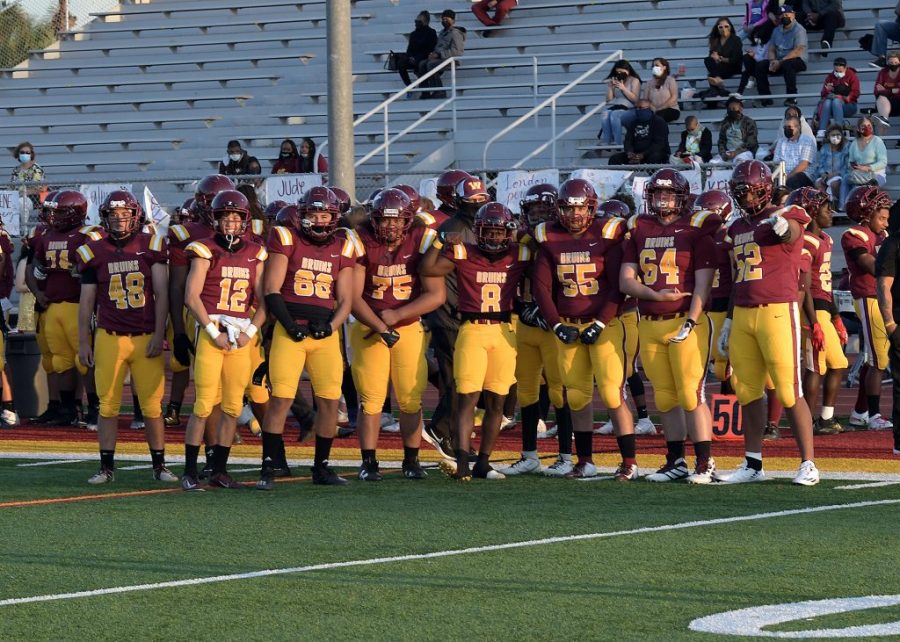 The past year has caused uncertainty in various areas of our lives. With health guidelines constantly changing to account for the highs and lows of the pandemic, most people weren’t sure if things were ever going back to normal. This uncertainty ran through high school athletics and finally, after eight months of on and off football practices, city officials confirmed that they would be moving forward with the decision to allow a shortened football season. Which leads us to the Bruins 2021 Spring football season.

The season consisted of five games that alternated between home and away. Home games allowed Bruin Cheer, Bruinette, and drumline to show their Wilson pride and cheer for the football players as long as they followed Long Beach health guidelines. Those guidelines included being six feet apart, wearing masks, and not stepping foot on the football field. Non-football players weren’t allowed on the football field as it was considered a “bubble” for the football team. Wilson football players also followed city guidelines as they tested weekly for Covid-19 and were not required to wear masks while they were playing. Although the usual crowds of spectators were not allowed, Wilson’s spirit teams, drumline, and football players were each allotted 3 tickets for families and friends. Spectators remained six feet apart in designated taped off areas and were required to keep masks on unless they were consuming food/drinks.

The season began with a home game against Compton High School. The Bruins played valiantly in this head to head game and ended up winning with a score of 27-26. Wilson scored the game-winning points in the final minutes as Junior Zander McLaurin hit Senior wide receiver Michael Bruner for a 25-yard touchdown.The game went as smoothly as possible and was considered a success as the first football game played in the current pandemic for Wilson.

The next week was an unexpected turn for the Bruins. Due to a positive test within the Poly football program, the Moore League schedule was reshuffled which set up a match between Wilson and Jordan .Wilson maintained a lead on Jordan throughout the entire game and ended up on top with a 32-6 lead.

After a thrilling win, the Bruins were back at home playing Jordan once more. The April Fools game was played on a Thursday due to the upcoming spring break. Once again the Bruins wiped the floor with the Panthers in a 48-7 lead. But the true highlight of the game was the senior celebrations. Ten Bruin football players were celebrated and were allowed to walk with family down the gauntlet and received a single yellow sunflower. Spirit teams, drumline, athletic trainers, and ASB also celebrated their respective seniors.

Following those riveting celebrations, the Bruins played Millikan at the Rams stadium during Spring  Break. This game proved to be watch-worthy as both schools could have won. The close match ended in the final minute as a game-winning tackle by Senior Matthew Garcia secured the victory for the Rams 28-21.

The last game of the season was a Wilson Vs Lakewood game which was a success. The last game started with the normal pre game meal where it was announced that it did not matter whether the bruins won or lost, this game was to have fun and enjoy as the seniors last game for the year. Luckily the Bruins were able to end off the season with a bang as Wilson won by a 28-7 lead on the Lancers.

This year and season taught us all many lessons. Although the season was shortened and took place in the spring that didn’t make it any less memorable. Seniors were glad to even have the opportunity to play. Wilson ended the 2021 spring season 4-1 but hopefully next season the Bruins will come back and have the chance to play a full Moore League and CIF season.