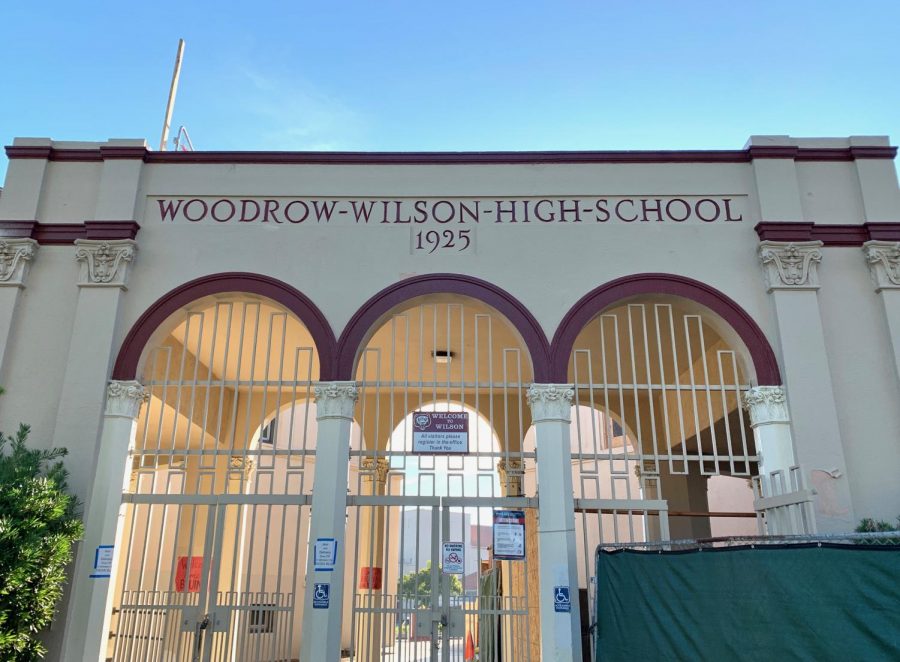 Woodrow Wilson's name on the front entrance of the school.

A user under the name “Jacob B” created a Change.org petition to change the name of Woodrow Wilson High School during the rise of the Black Lives Matter Movement this past summer, due to the questionably racist history of President Woodrow Wilson.

President Woodrow Wilson was the 28th president of the United States and served from 1913 to 1921, a time well before the civil rights movement that ran rampant with heavy racist ideologies and segregation. Wilson was racist even for his time, as presidents before him, Teddy Roosevelt and William Howard Taft, promoted black statesmen to public office.

Wilson administered federal segregation and once removed a civil rights leader, William Monroe Trotter, out of the Oval Office. The pro-Confederacy movie The Birth of a Nation was proudly screened at the White House during Wilson’s time in office, which inadvertently sparked endorsement for the KKK.

Jim Crow Laws advanced under Wilson’s direction, and when faced with the demand of Black people to change this style of rule, he sent the activists off with indefinite pledges of affirmation. Wilson rejected the criticisms of civil rights leaders and the entire Black community, stating that racial segregation helped the black community and that segration was not meant to humiliate people of color.

So why is Wilson’s name the title of this Long Beach school?

As stated by the Long Beach Unified School District Superintendent, Dr. Jill Baker, the renaming process entails the School Naming Advisory Committee notifying the Board of Education to put the task on their agenda as a business item for the entire board to approve.

“One of the reasons it’s a business item is that, especially to rename a school, there is a cost associated with that,” said Baker. “It could cost hundreds of thousands of dollars to rename a school like Wilson. They would have to consider if they want the district’s money invested in the renaming process.”

Renaming Wilson High would require not only significant financial investment funding, but would also interfere with the Wilson graduates who take pride in their family legacy at the school.

“We’ve had a large number of people express the significance of just the Wilson part of it, without thinking of the person’s full name, because of the generations of family members that have attended Wilson High School,” said Baker.

Baker served as Deputy Superintendent before her current role, and was the facilitator of the School Naming/Renaming Committee. “It’s been my job to maintain an active file of any time a member from the community writes in to say that they want to suggest a name for a school,” said Baker.

The superintendent was intertwined with the renaming process of Robert E. Lee Elementary School, as it is now titled Olivia Nieto Herrera Elementary, along with the Peter Burnett renaming to Bobby Smith Elementary School. The two schools in LBUSD were renamed because of the resurfacing historical aspects of the naming figures. There is a great deal of symbolism, said Baker, when it comes to “the historical perspective that goes back to slavery and racism.”

The petition by Jacob B does not need to warrant a specific number of signatures for the Advisory Committee or the Board of Education to consider a name change. The superintendent stated that the actual voice of the students is what has potential to make real change. “It wasn’t about numbers. It was really just a study of a historical perspective, and then the voice of the community,” said Baker.

Although no date is specifically planned, the School Naming Advisory Committee is set to meet again later this year, reported superintendent Baker. It is here that the fate of Woodrow Wilson High School will be discussed, as well as more names to be reviewed as options for new titles of schools in LBUSD.

The voices of students will be heard when the committee reconvenes, which offers the potential for a great change to be made in the Long Beach school. The students who read the name “Woodrow Wilson” every day when they walk onto campus are meant to be taken seriously, and it is through collaboration with representatives in the school district where real differences have the potential to be made.